Shakespeare’s centuries old condemnation of toxic masculinity is real and relevant in Brooklyn Theater Workshops inaugural production.  Join us for a limited run, March 7th – 10th at the Doxsee Theater at Target Margin.  For more information, visit us at brooklyntheaterworkshop.org.

How far are you willing to go to change your personality?

This film was created for the Imagine Science Film Festival, Symbiosis Competition. This competition pairs filmmakers with scientists and they have one week to write, produce, direct and edit a 5 minute film. This is our production, winner of the Konsonant Music Award.

In the days following the Trojan War, how do the women find the will to survive as they await their fate at the hands of the conquering Greeks? A story of women’s strength, hope, and community as their lives are uprooted.

I’LL NEVER LOVE AGAIN is a theatrical chamber piece about first love, first heartbreak and how those early teenage experiences haunt the rest of our lives – created from the playwright’s actual high school diary. It’s performed by a chorus of 13 people (!!!!) And it ends in late-night coffee, fellowship and music.

Crudo and Elsie are a Floridian couple who came together share a troubled pasts and a desire to move forward and away from it. They build their new lives on a foundation of mutual commitment and the reliable structures of Christianity and body-building. When Crudo becomes interested in exploring the sexual side of their relationship, the new experiences prove dangerous to them both. The cement of their repressed selves cracks open, and their lives  unexpected trajectories. The story of repression and transformation they experience is told through dance and textually saturated scenes.

Emma Stanton is a theatre artist working in Chicago and New York. She has worked with many of the Chicago’s best theater companies, including Redmoon Theater, American Theatre Company, About Face Theatre, Steppenwolf Theatre Company, Victory Gardens Theater, Oracle Theater, and Walkabout  Theatre Company (of which she is Associate Artistic Director.) In 2014, she was a semifinalist for a Princess Grace Award for her play Bojko and the Glacier. Her play No Candy will be performed at the Pershing Square Signature  theatre as part of Columbia University’s graduate thesis festival in spring of 2016.

General Admission
$12 in advance
$15 at the door

A raucous concert of songs from HAIL OBLIVION
by Joshua William Gelb and Stephanie Johnstone!
**October 12th, one night only, two performances***
First show at 7, Second show at 9:30

Buy your ($10) ticket in advance and get a free download code for the HAIL OBLIVION concept album (to be released January 2016)! Tickets live at: hailoblivioninconcert.brownpapertickets.com

HAIL OBLIVION is an epic pirate adventure that unfurls across the globe and across centuries as three ordinary men from three different eras are connected by the Sirens’ call to the open sea. From the Bahamas (1717), where Major Stede Bonnet deserts his family overnight to become a pirate, to Hollywoodland (1943), where Errol Flynn is arrested and exonerated in a very public statutory rape case, to present day Seattle, where a young advertising executive attempts to sell a luxury cruise in light of a recent Somali-Pirate hostage crisis, this swashbuckling fantasia features a roller coaster score of sea-shanties, jazz, and rock. This outlandish and provocative new piece of music theater takes on our cultural infatuation with piracy, challenging the tantalizing prospect of shedding moral, legal, and social obligations in pursuit of individual freedom upon the high seas.

Just found out I made final callbacks for the Juilliard MFA Acting program. I will join 50 actors (25 MFA / 25 BFA) out of 2200 for a three day callback workshop weekend. Regardless of what happens it will be an amazing experience.

Juilliard facilitated one of the most generous, exhausting, playful, heart-breaking, selfless, inspiring, soul-shaking weekends I have had the privilege of experiencing. My artistic soul is renewed.

Ever imagined an office where your dog isn’t just a dog – but your coworker? I am so exited to join Pet360 and the team for #ThePawfice. You can watch the full web series here.

Reviews From Others
by Joie 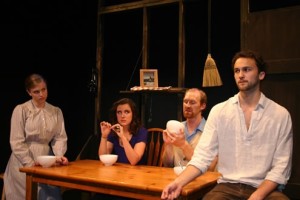 Today is the birthday of the excellent actor Joie Bauer (who you can follow on Facebook). Joie has appeared in a number of plays featured on Indie Theater Now, but today, in his honor, we shine the spotlight on the very first one I ever saw him in, which is West Lethargy by Stephen Kaliski.

In West Lethargy, Joie played Ringle, a man who has come west, with his wife Nugget, at least partly to try to find Nugget’s brother, who has disappeared in this nameless area in the middle of America on his way to California. Ringle and Nugget chance to meet another couple, Ellie and Turner, who likewise has stopped in this place, perhaps only temporarily–or perhaps they will go to California themselves.

Steve’s play is filled with enigmas and mysteries as it ponders some of the myths and truths at the root of this country of ours. In my review, which I wrote after seeing West Lethargy at FringeNYC back in 2010, I wrote:

West Lethargy's characters sometimes seem like they should be archetypal, but they're not; they're as individual as Americans are supposed to be, and they each have their own strong desires to invent themselves and their own mythologies. Sometimes this allows for connection among them and sometimes it makes for an ineffable kind of aloneness.

And here’s Steve himself on the themes of the play:

Like the four siblings of Three Sisters and the talking heads of Beckett, the two couples of West Lethargy can richly imagine their destinations, but when it comes to actually moving their feet, they’re left looking out the window, confined by that pervasive longing that so defines this theatre of the stuck. These stories remind us that planning an endpoint is not the easiest step of the journey. In fact, it can be the most suffocating.

West Lethargy is fascinating and filled with beautiful, lyrical writing. It also owed much of its success to its strong cast, which included, in addition to Joie Bauer,  Jeffrey Feola, Graham Halstead, Mikaela Feely-Lehmann and Suzanne Lenz. I hope you will check it out on Indie Theater Now!

About being SINGLE, OVER 35 & UNDER Fabulous

Joan, Doris and Gina are unlikely friends that met decades ago at BANANA SPLITS summer camp. Banana Splits is a therapy group for kids of divorce. Now in their 30s and living in NYC the women share experiences and wonder Y they are single.